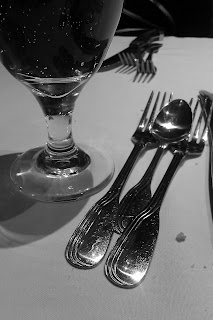 My smart phone has increased my fidget factor when I am out.  I'm not a big talker and love to have something to do with my hands when everyone is talking.  I don't play games, text, or check e-mail - I'm not that rude.  But I love to play with the camera.  I used to bring a sketchbook and sketch when I was out with people.  In my teens and twenties, that was cool and not only did it not offend anyone, my friends actually liked it.  But now at age 51, it is no longer cool and definitely viewed as rude.  So, now I bring my smart phone and take pictures at the table. Since everyone brings their phones everywhere now, I can get away with this. Ironically, I am one of the few people who refuses to answer his phone at meals, because that seems rude to me. Now if everyone would just bring sketchbooks and plop them on the table, I'd still prefer that, but I don't live in an art compound, so that's not going to happen.

When everyone is busily engaged in conversation, I snap a few photos of people, which always come out blurry because it is dark.  But then I can sneak out a few still life shots, like this one of the wine glass and silverware.  It is not a great shot but I like the stark contrast of the black and white image.  The photo was not processed in any way. This is it straight out of the camera (HTC Eris). I changed the settings on the camera to BW and was able to steady it well enough to get a decent low light picture. 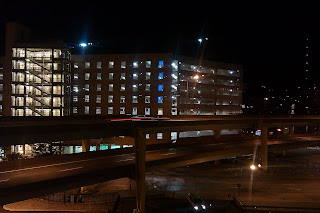 Here's another way to get a clear low-light picture with a smart phone: The color photo of the parking garage was taken by pressing the phone against the window of the hotel room, which steadied it enough to make it a clear photo.  Not a great photo but I was bored.  How can cable have so many programs and still have nothing to watch?