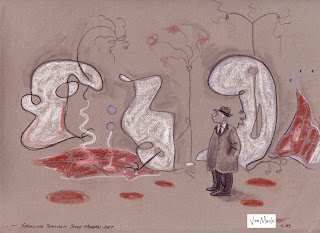 By the way, while it may appear as though I am favoring one artist for these posts, I am not receiving the variety of artwork that I had hoped for from other artists and I happen to have ample access to much of Vee Mack's unpublished portfolio. Therefore, until I receive other artwork, I will have to rely on what I have on hand.
Posted by Veemack at 4:35 PM 1 comment: